Botox & Xeomin became common household terms in recent years and are among the most popular cosmetic services. It works. It is safe. It is predictable and provides noticeable results with virtually no downtime. Basic Botox & Xeomin treatments hide facial wrinkles created by repeated movement. Xeomin is a newer product that is also available at our office and carries some advantages over Botox.

Only trained board-certified dermatologists and dermatology-trained certified physician assistants inject Botox & Xeomin at our practice. If performed conservatively, your family and friends will appreciate that you look more relaxed and younger, but they will not be able to figure out how you did it. 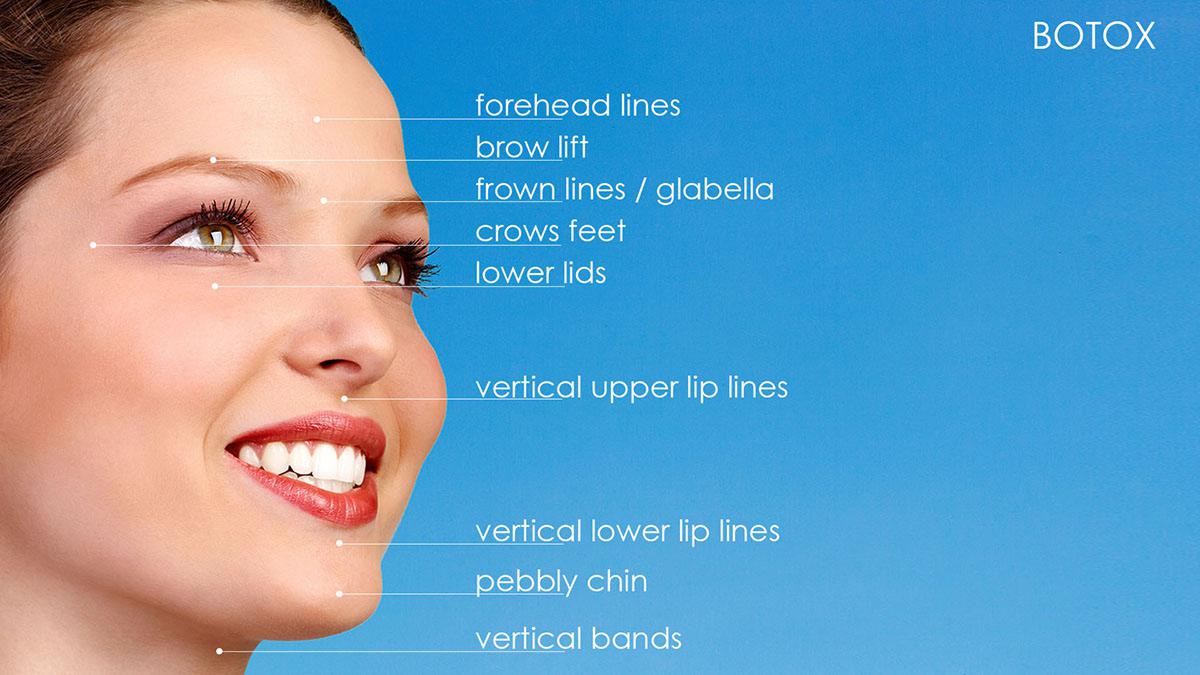 (*)90% of people will fall within this range

Service is performed only by our dermatologists and dermatology-trained certified physician assistants .
Book an appointment
Find out the complete price list for all cosmetic services.
Check out our complete Price List

Dr. Ringpfeil: “In this short video, I will touch on the difference between Botox & Xeomin and other facial fillers, explain which facial muscles can benefit from Botox & Xeomin injections, and mention where people usually get the treatment done. I will also talk about the safety and difference between the various anti-wrinkle products currently available on the market. ….. read more

The most common areas for wrinkle relaxation are the frown lines between the brows, crow’s feet on the outside of the eyes, wrinkles on the forehead, and vertical lines above and below the lips where lipstick may bleed.

In addition to wrinkle relaxation, advanced use of Botox & Xeomin allows the shaping of brows and lifting of brows and eyelids. We can up-turn corners of the mouth and soften a puckered chin. We can also reduce prominent vertical bands in the upper neck, minimize a gummy smile, and turn a square face into a more triangular one.

Botox & Xeomin are currently FDA approved for cosmetic use for frown lines between the brows and for the treatment of lines on the outside of our eyes that occur with smiling and squinting. The use in all other areas is off label, just like the use of aspirin is for prevention of heart attack or stroke.”

How Xeomin Compares to Botox

Unlike filler placement to areas of the face where aging causes loss of volume of the skin and underlying fat and bony structures, Botox & Xeomin target facial wrinkles that are created by dynamic movement. As we age, loss of skin elasticity allows repetitive muscle movement to create a visible crease in the skin. Botox & Xeomin weaken this muscle movement and prevent the line from forming. Many times, they even reverse wrinkles that have already settled.

Let’s take the eyes, for example. With every smile, our body releases endorphins that keep us happy. It would be unhealthy not to smile anymore. But with the help of Botox & Xeomin, we can have a guilt-free smile without fear that we are deepening the dreaded crow’s feet. On the other hand, we can untrain the forehead muscle and those between the brows to no longer look constantly strained or angry.

Botox & Xeomin work best to prevent wrinkles. Once wrinkles are visible at rest, it will take some time until the skin returns to its original shape. Deep static lines may need help from a filler if they have not resolved after 3 Botox & Xeomin injections performed 4-6 months apart. 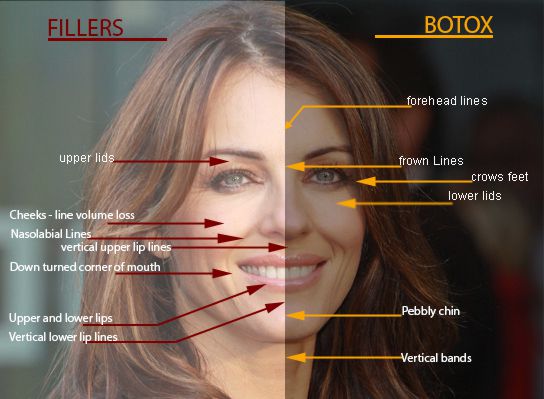 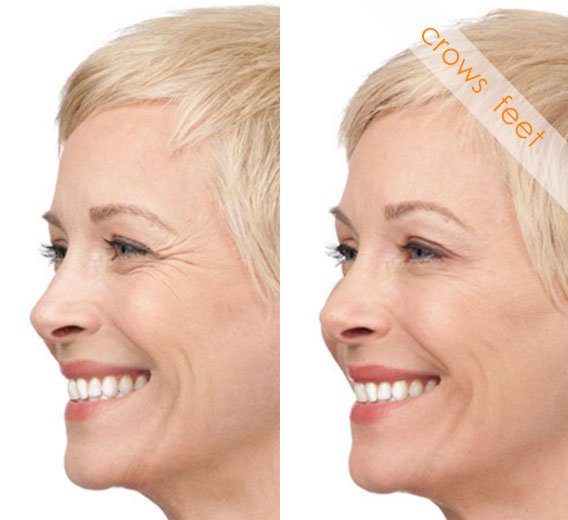 Learn how these injectables can be strategically placed to address specific areas on your face that bother you.

Starting on the forehead, the frequent raising of the brows as part of our facial expression when we are younger can eventually lead to horizontal forehead lines. Botox & Xeomin distributed in small aliquots equally across this flat sheet muscle will relax these lines and will help you unlearn to subconsciously use this muscle. In people who have a predisposition to developing a Spock eyebrow, Botox & Xeomin may have to be placed here (lateral lower forehead) at the time of the first injection or with a delay of 14 days.

Moving to the glabella, the interaction between a bellied vertical muscle (point to the procerus) and 2 fan-shaped muscles that trail upward and outward (point to corrugators) creates one or two vertical lines that make us look angry. Placement of Botox & Xeomin to 3 or 5 different points in this area (pointing to the V created by these muscles) allows us to look relaxed again.

When fine lines occur just below the eyes or in those with a muscular ridge beneath the eye known as a “jelly roll,” a small amount of Botox & Xeomin (point to the mid pupillary line) can make quite a difference as long as the muscle shows perfect contraction before the start of treatment.

Botox & Xeomin can shape brows. While women often seek arched brows, men typically prefer linear brows. When our dermatologists administer injectables to the glabella (point to glabella), the lateral brow, and the upper lid (point to both), they create the desired look.

While Botox & Xeomin are predominantly used on the upper face, there are focal targets on the lower face. INjections to the upper cutaneous lip (point to it) can reduce vertical upper and lower lip lines (make an O) created by sun exposure, smoking, or genetic predisposition. Botox & Xeomin placed here (point to below nostrils) will lower the cutaneous lip to conceal the gums when your smile reveals them.

A strong mentalis muscle can result in puckering of the chin (point to chin) when the lips are closed at rest. A small amount of Botox & Xeomin assures that the muscle is smooth, but does not become fleeting.

These vertical lines that are visible in our forties in thin people and with a genetic predisposition (point to them) are called platysmal bands. Botox & Xeomin can achieve enough relaxation of platysmal bands to be noticeable in more than 50% of those who are treated. In others, the relaxation might not create a significant difference. Yet, it is worth a trial.

Women from the Northern Far East like Japan, Korea, and China often desire to minimize a squared contour of the lower face (point to lower face). Botox & Xeomin can weaken our bite or masseter muscle (point to masseter) enough to render a more oval contour here.

How Long Does Botox or Xeomin Last?

In general, men have stronger and bigger bellied muscles than women and therefore require larger amounts of Botox & Xeomin. Botox & Xeomin typically last about 4-6 months in stronger bellied muscles such as in between the brows, in the chin, and in the masseter. It wears off after 2-4 months in thinner muscles such as around the eyes and in the forehead. Botox & Xeomin should wear off before the next round is administered to prevent the muscle from weakening completely and permanently.

The Best Place to Get Botox or Xeomin

Please carefully consider the professional who places your Botox & Xeomin. While Botox & Xeomin parties have vanished, for the most part, almost everyone offers Botox & Xeomin, from your hair salon or yoga studio to your gynecologist, emergency room physician, and dentist.

You can have your weekend-trained gynecologist eradicate the furrows between your brows, but unless Botox & Xeomin is all he or she performs, this gynecologist will probably not know the fine points that relate to brow position and minimizing preexisting asymmetries. I recommend that you trust those who have studied muscles of facial expression in detail, namely your dermatologist or plastic surgeon.